What is a Lineage?

A lineage in Buddhism is a line of inheritance (usually referred to as a transmission line) of the Buddhist teachings that is said to have originated by the Buddha himself. The idea being that a person who is deemed to be a successor of a particular lineage connects to an unbroken line of teachers back to the Buddha and his deepest realizations. Many branches of Buddhism, including Chan, maintain records of their historical teachers. These records are used to confirm the legitimacy of living Dharma teachers.

The Chan lineage starts with Buddha Shakyamuni around 500 BC and ends today with all contemporary masters. The first 28 successors of Buddha were born in India, including Bodhidharma (around 500 BCE) who is one of the teachers that brought Buddhism to China. He is regarded as the first Chinese patriarch and founder of the Chan lineage.

Five more patriarchs followed, ending with Huineng (638-713), the sixth and last ancestral founder. He is the ancestor of all Chan Schools. Following Huineng, the transmission divided into five branches, of which Linji and Caodong survived. The Linji School, founded by Linji Yixuan (died 866), was also transmitted to Japan where it became the Rinzai School of Zen. The Caodong School, founded by Dongshan Liangjie (807-869), became the Soto School in Japan.

In 2006, Master Sheng Yen established Dharma Drum Mountain. He combined the teachings of the two schools he received transmission from, Caodong and Linji, and included teachings from Indian Buddhism, Theravada Buddhism and Tibetan Buddhism.

A more detailed biography of Master Sheng Yen can be found at Wikipedia. 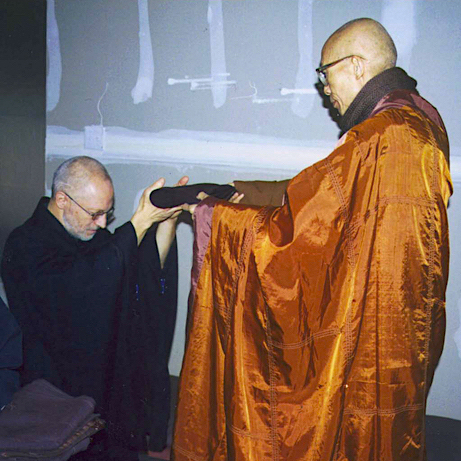 "Master Sheng Yen was scholarly and pragmatic, and as a teacher flexible. These traits I much appreciated."
Max Kälin
Shopping Basket